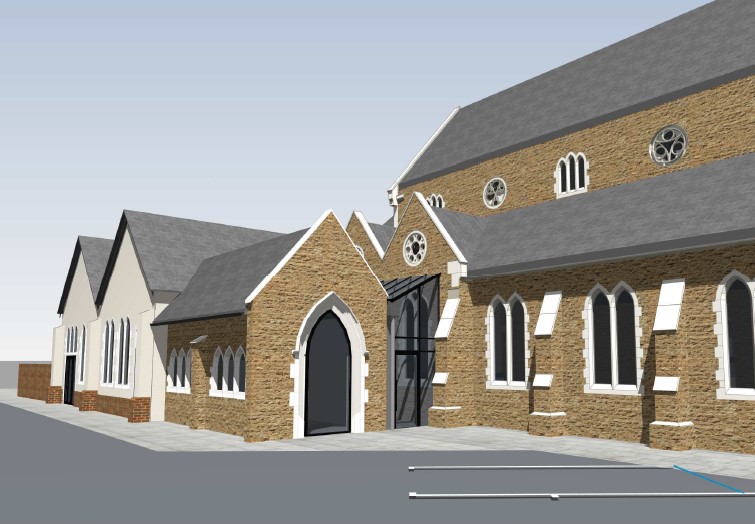 Waverley Borough Council’s Western Area Planning Committee considered our plans on 9 July, and asked us to reconsider the architectural approach to the Victoria Road extension.

Having considered the Committee’s feedback, we have developed new proposals, which retain the same general building form as previously proposed (double-gable pitched roof, reflecting the existing form) but in such a way that the building appears more a modification of the existing than the previous proposals did. In particular, where there seemed clear resistance to the use of brickwork, we now propose the retention of existing render and stone. Existing window openings are also retained and re-glazed; one window is modified to incorporate a set of fire exit doors at lower level.

The existing stair tower is also now retained at ground floor level (rather than being demolished in its entirety) and extended forward, in facing stone to match the existing. On the new front gable elevation, we are proposing to re-build the existing arched doorway as a new feature stained-glass window (ie using existing stonework surround).

The treatment of the (now-exposed) apse has been clarified on the drawings, with the proposal that existing plaster is removed to expose existing stone behind. This is in lieu of hung-tiles, which now do not feature in proposals for the rear of the building and would therefore be somewhat out of context.

The retention of the render finish represents something of a compromise on the church’s side – its drab appearance at present contributes to the unsightly rear elevation of the halls, but this will be improved through the reduction in height of the building; it is also proposed to use a slightly lighter colour finish to ensure a consistent finish where openings are infilled etc.

We believe that the general architectural approach described above firmly addresses concerns raised by committee previously and we trust this can be supported by the Council as it is taken forward for consultation.

The new plans are expected to be considered by the Planning Committee on Tuesday 10 December.

For full details of our plans, please visit our Plans page.

Help us reach our target

We need your help to raise the £2 million needed to turn our vision into reality. There are many ways in which you can become involved and help us raise these vital funds.

This website uses cookies to improve your experience while you navigate through the website. Out of these, the cookies that are categorized as necessary are stored on your browser as they are essential for the working of basic functionalities of the website. We also use third-party cookies that help us analyze and understand how you use this website. These cookies will be stored in your browser only with your consent. You also have the option to opt-out of these cookies. But opting out of some of these cookies may affect your browsing experience.
Necessary Always Enabled
Necessary cookies are absolutely essential for the website to function properly. This category only includes cookies that ensures basic functionalities and security features of the website. These cookies do not store any personal information.
Non-necessary
Any cookies that may not be particularly necessary for the website to function and is used specifically to collect user personal data via analytics, ads, other embedded contents are termed as non-necessary cookies. It is mandatory to procure user consent prior to running these cookies on your website.
SAVE & ACCEPT
%d bloggers like this: